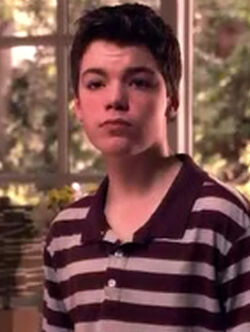 Adam, played by Gabriel Basso, is Cathy's bratty, hard to control, and unruly son. Adam who is always playing pranks on his mother and making her jump through hoops for him is in for a rude awaking now that she has decided to change the way she has been parenting him. Cathy is not letting Adam get away with what he used to anymore no matter what it takes.

After learning about her cancer, Cathy decides she needs to work on her relationship with Adam by making him stay home instead of going to soccer camp. Adam is confused by his mother's odd behavior, but is able to form a friendship with Andrea. Who has been taken under Cathy's wing. He also meets a nice girl named Mia, and they begin to date. Adam doesn't learn about his mother's illness until the season finale. He seems to show no emotion at first, but is last seen crying uncontrollably after finding the storage unitl he discovers a key to a storage locker that is filled with hundreds of gifts for his future birthdays, holidays and major life events. He realizes his mother is not going to live very long and finally reacts emotionally.

Adam is still acting the same as before he knew Cathy was sick. His mother's cancer causes him to become popular in school. Leading him to use sympathy as a way to have sex with various girls since Mia doesn't want to be sexually active. This leads him to have sex with a hooker/dominatrix in his parent's bed, and for him and the entire Jamison clan to develop crabs. When Cathy and Paul find out, they're lead to believe that Mia gave the STD to him. Causing Cathy to go to Mia's house and accidentally reveal Adam's unfaithfullness. While Adam at first blames his mother for Mia ending their relationship, he's reminded that it was his fault for cheating on his girlfriend in the first place. He then begins chatting with a girl named Poppy through an online cancer support group. When they finally meet, Adam discovers that Poppy is actually a thirty-something year old woman. Despite this, they bond over their immature sense of humor and their parents' diseases. Before the family is supposed to go to Italy for Christmas, Adam discovers that Poppy's father has actually been dead for several years. He confronts Poppy, but she explains that once he loses his mom, he will feel like a part of him is missing.

Adam has joined a prayer group at school, where he meets the extremely religious Jesse, who becomes his girlfriend. He moves in with his Uncle Sean following an argument with his mother.

After Cathy has an accident during Adam's 16th birthday brought on by the effects of her chemotherapy, she brings him to the storage locker and has him open all his presents. She then tells him that she was only doing the chemo so that way she could live another year and see him graduate from High School, but is now stopping her treatment so she can enjoy the rest of her time. In school, Adam is having troubles and is his Chemistry class, and is on the verge of failing. With the help of a tutor that Cathy hires, Adam is able to pass. As it become clear to Adam that Cathy will most likely die before he finishes High School, he decides to accelerate the completion of his degree requirements online, his frequent absences from the house which he lies to his family that he is hanging out with friends while he is really going to school to write exams. In a small, informal and previously unannounced ceremony at the Jamison home, Adam's principal, is able to hand a cap and gowned Adam his high school diploma in front of Cathy and the rest of the family.