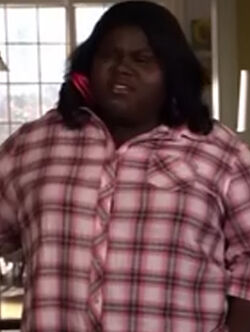 Andrea is played by Academy Award winner Gabourey Sidibe. Andrea plays one of Cathy's students, who has a huge "chip on her shoulder", stemming from her weight issues. Cathy sees Andrea as someone that deserves fighting for and wants to help her achieve her goals and tries to motivate Andrea to lose weight and live a healthier lifestyle. Andrea on the outside seems mean and snotty, but still carries a confidence and liveliness in the same sense which attracts Cathy to her.

Cathy takes an interest in Andrea during their summer school class together, and offers her a cash reward for losing weight. She is the first person to realize Cathy is having an affair with the school painter, and becomes jealous as she had a crush on him. She lies to Cathy about her upbringing and economic status, claiming her mother is a drug addict and they live in poverty. Cathy visits their home to discover she lives in a lovely upper middle class home with two educated, caring parents.

Andrea, on Cathy's invitation, comes to live with Cathy and her family due to her parents moving away to Ghana for missionary work. She starts dating Paul's co-worker Myk, and loses her virginity to him. After they get engaged and decide to elope, Paul reveals to Andrea that Myk is in the country illegally, and might be only marrying her for a green card. She then calls the police and reports him.

Heartbroken over Myk, Andrea spends her winter break in Africa and connects with her heritage and renames herself Ababu. She forms her school's first ever Black Student Union, and then briefly takes a job as Paul's assistant for his motivational speeches while they're in Puerto Rico. But quits due to his increasingly diva-like behavior.

In season four, she is a student at a local college in the fashion design program, with Isaac Mizrahi a guest professor for the year. Her school year does not start off well, as she's not getting along with her roommate, and losing the sparkle in her design work largely because of her thoughts on Cathy's imminent death. Mizrahi is able to get Andrea back on track, and he offers her an internship in New York. She decides not to accept it as she knows that Cathy will die when she will be in New York, but Cathy convinces her to accept it, which she does.