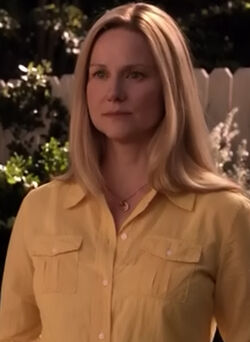 Cathy Jamison, played by Laura Linney, is a straight edged, reserved, high school History teacher in Minneapolis who is diagnosed with stage four melanoma and given a very short time to live; After learning the news she decides to change the way she lives her life in a huge way. Cathy has always seemed to be the "sensible person", and from the moment she learned of her diagnosis, she decides to "let her hair down", and take charge of her life.

Cathy is the younger sister of Sean. Their mother died of cancer many years ago, and their father has since remarried. Cathy has known her husband Paul Jamison since college, and they have their son Adam Jamison.

After being diagnosed with melanoma, and after being told just how little time she has left to live, she lets go of her old, boring, routine-based lifestyle and does things she would never have done before, such as get a pool-hole dug in her backyard (but she ends up not being allowed to actually make it a pool) buy an expensive new convertible, take out the money she has been saving for her retirement, and attempting to become closer to Adam and Sean; however, she does the opposite with Paul, throwing him out of the house without any explanation; however, during her brief affair with the painter Lenny, Paul sees them having sex in the garden, and this damages their relationship even more.

Cathy also strikes up a friendship with her unamiable, elderly neighbour Marlene; at first Marlene is irritable and unwilling to become friends with Cathy, but they become closer as the first season goes on. Marlene is one of the first people to find out about her cancer (apart from Dr. Todd and the cancer group Cathy briefly takes part in), and, although somewhat insensitive, she is good support to Cathy. Their friendship abruptly ends when Marlene commits suicide by shooting herself in the head, after almost shooting Adam because of her Alzheimer's.

Cathy also becomes friends again with her old college room-mate Rebecca, a man-hungry blonde who Cathy hasn't spoken to since her wedding, because Rebecca was the bridesmaid, and didn't turn up because she met a man. Their relationship has always been strained because of Rebecca's hunger for men, and this continues when Rebecca and Sean begin a relationship; however, when Rebecca becomes pregnant, Cathy is extremely excited.