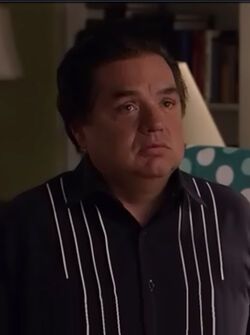 Paul Jamison, played by Oliver Platt, portrays himself as Cathy's charming, and lovable, but childish husband. Cathy has made Paul move out of their home because she is tired of his childish attitude and feels it's time to take care of herself. Cathy hopes Paul will grow up and Paul is determined to be with Cathy and make things better yet still has no idea about her cancer diagnosis.

Cathy's kicks Paul out of the house because she is fed up of looking after him. He doesn't really understand the situation but appeases her in the hopes that their marriage can be repaired. While separated, he has a sexual encounter with another woman; this is ultimately forgiven in the face of Cathy's affair. After Cathy reveals her cancer to him, he moves back in and becomes overly attentive and doting.

After getting laid off, Paul takes a job at a electronics store. He befriends his co-worker Myk and introduces him to Andrea, but later discovers that Myk is in the country illegally and proposed to Andrea to get a green card. During the finale, Paul appears to Cathy as a hallucination at the end of the marathon she runs and then a cut scene shows him being worked on by an EMS team after ingesting cocaine earlier in the day.

Paul is now recovering from his heart attack, and begins to write a blog about his life and Cathy's cancer. They attend a motivational workshop led by Joy Kleinman, who becomes Paul's mentor. After Joy dies by getting hit by a bus, Paul takes over her motivational self-help empire, under his tag phrase "flip that switch".