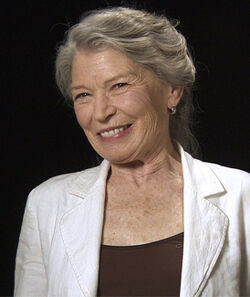 Marlene is Cathy's elderly neighbor, and later friend. She lost her husband to colon cancer several years ago. Although she finds Cathy annoying first, the two quickly become friends, eventually becoming close to the whole family. Marlene is the first person to know about Cathy's cancer. She figures it out after her dog begins to stalk Cathy, because he supposedly did the same thing right before they found out her husband was sick. Marlene starts to exhibit episodes of memory loss, often suddenly forgetting where she is and who people are. She finally admits to Cathy that she has Alzheimer's, but doesn't want anyone else to know. While Adam is cleaning her house, she pulls a gun on him and orders him out of the house. To her horror of what she might do as she continues to deteriorate, Marlene makes her decide to kill herself. At her funeral, it's discovered that Cathy was left her house.

During the season two premiere, Cathy starts to have imanginary conversations with Marlene while undergoing experimental treatment. She repeatedly sees her eitheir when she's undegoing treatment for her cancer, or when she's close to death. In the season three episode  "KillJoy", she appears right after Joy Kleinman is hit by a bus in front of Cathy. Alluding that her cancer has come back.