Edit
watch 01:54
Obi-Wan Finale - The Loop
Do you like this video?
Play Sound
Rebecca 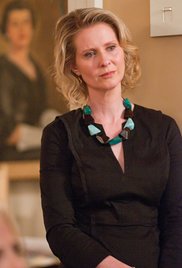 Rebecca is Cathy's former best friend, and the ex of Sean. She is played by actress Cynthia Nixon.

Cathy first met Rebecca in college as roommates. They became best friends, and almost got matching tattoos on their lower backs. Despite Cathy claiming that Rebecca has always been selfish, she still asked her to be a bridesmaid at her wedding. But a few days before the ceremony, Rebecca left to go camping with a guy she just met. Cathy ended their friendship, and the two didn't see each other for several years. She also becomes a pharmaceutical sales rep.

She contacted by Paul to come to Cathy's surprise birthday party where they get drunk and sing karaoke. When she begins a sexual relationship with Sean, Cathy reveals that she has always found Rebecca to be selfish and a bad friend, which serves as a wake-up call and leads to the end of the romance. She becomes pregnant with Sean's child after not taking her birth control. This news leads to him telling her that he wants to raise the child together.

Rebecca moves in with Sean and tells him about Cathy's cancer. She also finds out that the baby will most likely be a girl, and decides to name her after Cathy. Rebecca continue to grow closer, and briefly become engaged during Thanksgiving, until she miscarries. She then leaves to take a job with her company in San Francisco since Sean has gone off his bipolar medication.